As an alternative to using traditional ducting, eco-park® systems are based on thrust ventilation, the principle of which we have developed and enhanced over the years to considerable effect.

No compartments or dividing walls

Unlike ducting, thrust ventilation allows the construction of enclosed car parks that have an open, clean and safe environment without compartments or dividing walls. The exhaust air is extracted using the main exhaust extract fans. The air flow is determined by the current regulations for car park ventilation systems (BS 7346–7:2013 and Approved Documents B and F).

PVE recommends that exhaust air should be extracted via a builders work shaft/enclosure at a maximum velocity of 10m/s and ideally 5 metres above street level. In the case of fire, visibility of at least 30 metres should be provided 45-60 minutes after the fire has started and this is often examined and proved by the use of a CFD model at the design stage. If possible, any supply air should be introduced/arranged naturally through builders work openings or via the entrance ramp. Should this not be practical, supply air will need to be introduced mechanically.

In the event of a fire, it may be necessary to selectively close some of the supply and exhaust openings via dampers to let/allow and control maximum airflow pass over the seat of the fire. The induction thrust fans will assist with the process of moving the air through the car park creating the correct flow direction and ensuring that blind/dead spots are eliminated. Thrust ventilators use this natural property of propulsion to accelerate the maximum mass of air and this is the force we measure in terms of Newtons, with fans that are multi-speed and supplied in either 50 Newton or 100 Newton versions.

It is worth noting that ultimately the total amount of air that can be moved will be a multiple of the actual air passing through the fan. This is the induced power and it varies dramatically with the type of fan. Induction fans, depending on design, induce up to 19 times the volume of air passing through the fan. With the older impulse fans this multiple is at best only 8 times.

The location of the thrust fans in the car park is extremely important for the overall efficiency of the system. With many older systems efficiency was influenced by the Coanda or skin friction effect, the entry and exit conditions of the fan and the difficulty of positioning the fans above parked vehicles because of their physical size.

In practice fans were often fixed against the soffit near to down stand beams or at worst at the junction of the wall and soffit. This meant there was always a Coanda effect at varying levels. Because of the Coanda effect, the theoretical thrust was rarely if ever available in the installed mode. Also, an operational car park would have many vehicles parked that would inevitably hinder the flow pattern. As a result performance between test and actual could be drastically different. 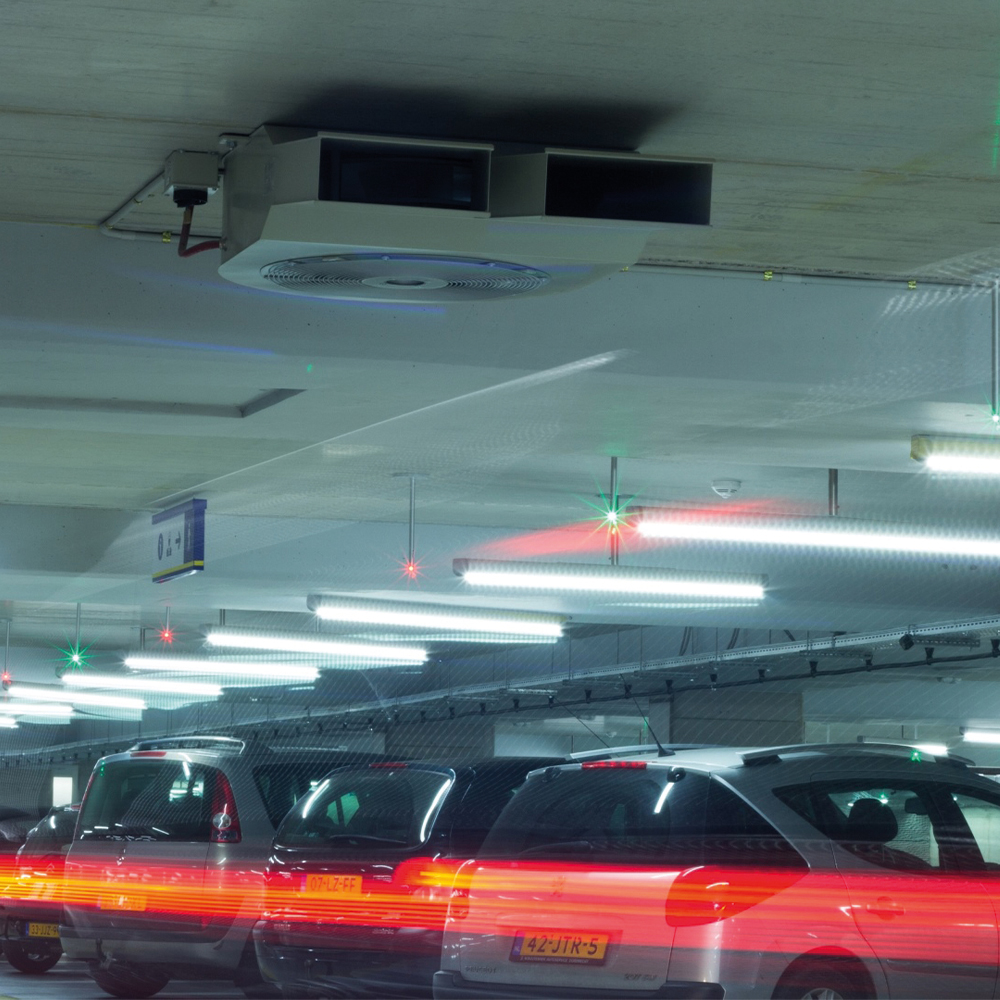 The discharge pattern of the modern induction fan virtually removes any concern about loss of performance due to the Coanda effect. The fans are ultra slim in design, which means that they can be fixed directly above the driving lane where their volumetric efficiency will have the maximum effect. This is one of the big advantages of the induction fan over the impulse fan.

The CO/NOx levels and all smoke monitoring within the car park will be checked on a continual basis by pre-set detection devices. Upon detection a signal is sent to a PLC within the main control panel. This is the heart of the parking ventilation system. The thrust fans can be individually controlled and will in normal operation fully dilute the air in each area / zone of the car park.

Should there be a change in air quality or should smoke be present, the detection system will record this and the PLC will react accordingly. Depending on the location and status of any change in air conditions, the PLC will activate the ventilation system in accordance with the programmed functionality diagram.

If you have any questions regarding our car park ventilation solutions, please do not hesitate to contact us.